Each event will normally consist of a 60 minute score with a mass start, normally 7:00pm. Late starts will be permitted but the common finish time will still apply. Exceptions to this format may be permitted by special pleading to the Co-ordinator.

A headlamp / torch is highly advisable, but it need not be a full-power terrain night-O one. You should also wear a light / reflective top to help ensure you are seen. Whistles are also required.

Final League table after all 9 events

The normal time for the mass start is 7:00pm, in order to avoid the worst of the rush hour traffic.

Events use urban streets and paths, with the occasional stretch of open space or canal towpath. A headlight or torch is often useful, particularly for the longer courses, but it doesn't need to be particularly powerful - enough to see your footing and read the map.

Participants are responsible for their own safety and take part at their own risk. Courses may cross main roads and some reflective clothing is advisable.

Trophies are awarded for handicap winners at the end of the season. 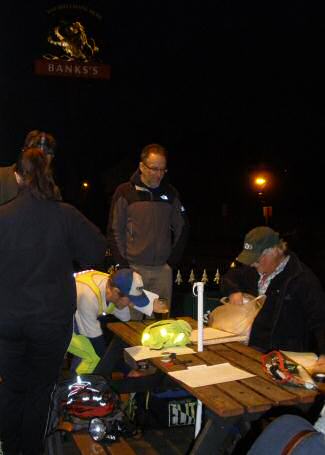 Russ Fauset in charge at the 2010 Droitwich event centre.