A series of informal score events that take place on winter weekday evenings. The format is a one hour score event. Harlequins' WEE are arranged for Thursday (or occasionally Tuesday) evenings whilst our neighbour club Octavian Droobers hold their "After Dark" events on Wednesdays.

A minor correction to the results of the Kingsford final event was posted on Mar 28. This does not affect the overall placings.

What a finish to the WEE League! I knew it was going to be close, but three ending up with the same score, that's very very close! Congratulations to the three men in question, John Embrey, Dave Williams, and Chris McSweeny. Luckily they were in three different age classes so oldest first per the rules. Congratulations to John Embrey on retaining his title, Dave second and Chris third. On the evening both Chris McSweeny and Andy Hemsted cleared all the controls within the 60 minutes. I could not do it in daylight so hats off to you both. The ladies event was also hotting up with the possibility of a three way tie again in prospect, unfortunately an injured Jacky Embrey was not fit enough to run so it came down to Kerstin and Alison slogging it out right to the finish. They tied on the event with Alison getting the extra point per the rules, but Kerstin managed to win the league by just one point. Well done Kerstin and well done Alison our W75 star. Mention must be made of Kath McMillan, who came third in the league, she won every event she entered, next time Kath you need to enter all the events to take home the stunning trophy... 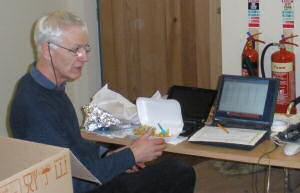 This WEE League season has been the most succesful yet, in terms of number of competitors, quality areas and quality planning. Thanks to all who helped and all who competed and made it worthwhile. ...Next Year? Volunteer now!

2010 - 2011 Programme
All events on Thursdays unless otherwise stated

Volunteers to organise and plan events are very welcome and will receive 25 points for their efforts. Volunteers please contact the league coordinator.

These events are intended as a good introduction to night orienteering for the newcomer, but will still be competitive for others. There will be a mixture of relatively easy controls on line features, such as paths, fences, ditches etc and more difficult controls for the more experienced night orienteers. The line feature controls help considerably for relocation and will normally allow the opportunity to go for some of the other controls. Controls will have different point values depending on their difficulty or distance.

The time for starts is typically 18:00 to 19:00 but it does depend on when it gets dark! If cloudy the first runner normally can go off 10 minutes after the end of "Civil Twilight".

Obviously a torch or headlight is needed (the more powerful the better)! Participants are responsible for their own safety and take part at their own risk. PLEASE NOTE that the carrying of whistles is compulsory at all HOC events (we usually have a few to hire or borrow).